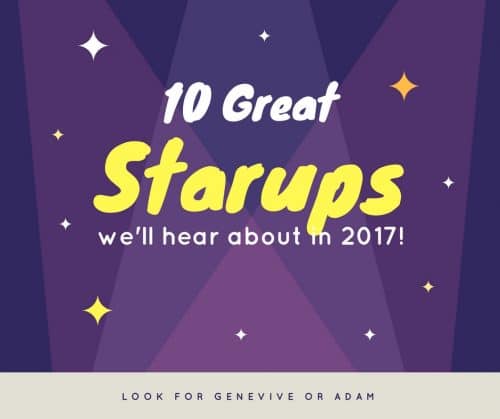 Great ideas always have the potential to succeed, even when the economic conditions are not exactly favourable.

2016 has led to the emergence of some already well-established start-ups on the market and has seen the emergence of innovative businesses that range in every field: from cancer research to solutions to deliver faster and more powerful connections to the fierce competition. Let’s see which of these start-ups, launched in recent years, will develop rapidly in 2017 thanks to all the potential of their great ideas.

Great ideas often arise from simple needs. Few seconds to download a two hour movie, this is Starry’s promise, a wireless receiver antenna capable of delivering up to one gigabyte per second. The start-up aims to provide the best and fastest possible wi-fi connection in the world.

Juicero is the start-up that promises to make the machine that will provide you with the coolest juice you’ve ever tasted. Three years after its launch, Juicero uses compression of fruit bags to extract juice that allow it to be used without soiling and then having to clean. Now if only there was a perfect wine machine that could do the same! Of course it connects to the internet and has other features that qualify it as an innovative product, but the starting price, about $ 700, has caused some perplexity and criticism. Investors, however, ensure that the price will drop rapidly with the growth of the company.

In the medical and healthcare field, Grail has created a system that is advanced enough to diagnose cancer in the shortest possible time. There are so many new things about the health sector: Grail has tested a new type of blood test that can detect any type of cancer with much faster time than traditional tests.

Juno is a promising start-up that aims to be like Uber but at the same time much different. An alternative to Uber, a more friendly and cheaper version for drivers, what not with all the legal issues that Uber faced at the end. Tested by a small number of people, the service is only active in New York, but it is very likely that the startup created by Viber’s founder, Talmon Marco, will have a lot of people talking about it in 2017.

Otto is a start-up and at the same time the name of a self-driving truck that will revolutionize shipping. We often talk about a driverless car, but according to Wired, it’s possible to convert any type of vehicle to an auto-guided vehicle with about $30,000. There is, however, the possibility that freight transported by the car accelerates the development of automated driving technologies: a team of Tesla, Apple and Google engineers is researching a set of sensors capable of creating autonomous fleets of trucks just like Otto.

Alex Stone, a former US Marines Sergeant, founded this platform that allows college sports teams to recruit veterans to use them as coaches or motivators within the team and transform them into Athletes of Valor. These coaches will have so much to offer to the young athletes such as tips on perfect nutrition or how to improve as athletes.

Zipline is a start-up that has built paratrooper drones in order to deliver medicine in Rwanda’s most isolated areas. For five years, the Zipline team has secretly been working on its idea of ​​a humanitarian mission. In April 2016 they unveiled the plan to the world: a drone which can parachute blood and medicine supplies in some areas of the world that are very difficult to reach, such as the particularly isolated places in Rwanda. The project has received wide consensus, so as to allow the first contacts with government agencies.

Recharge is a start-up that introduces the idea of minute guesthouses. Need to stop an hour to reload? With the hectic times of today this is a widespread need with few solutions. A nap and a shower on the fly are now possible thanks to the networking of hotel operators. The start-up Recharge is developing this business model; The cost of the stop is about 66 cents a minute. A price not too high to reload and then return to your adventure. If you’re on a business trip it can also allow you the chance to do some work while on the run, as you’ll have enough space for all your work items and the time needed.

Nanit is a baby monitor with super powers. The baby monitor is certainly not a revolutionary invention, but Nanit does a lot more: through a video camera it combines the data that it has recorded through its classic monitor function. Thus you can know how long the baby has slept, if and when it woke up and also identify its favourite positions.

Spotted is a new form of native advertising for celebrities. Spotted is an online platform based in Boston that deals with celebrity native advertising, a service already involving some major brands such as New Balance and Warner Bros. Its founder and CEO is Janet Comenos.