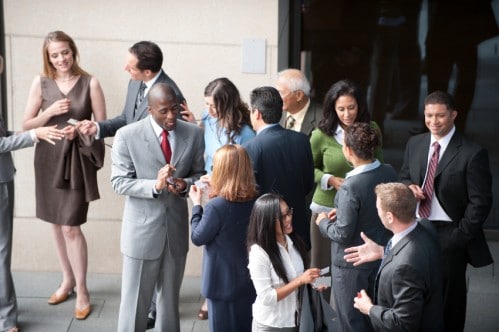 There are few words in the business world that fill people with dread more than networking. It conjures up all manner of hideous thoughts, and it can often leave people so apprehensive that they end up running for the hills rather than attending the event.

Oddly, many women suffer with pre-networking nerves far more than their male counterparts. I say oddly because women are far better equipped to handle such events than men will ever be. And once you have a baby, you get so used to speaking to total strangers about all sorts, from your delivery to stretch marks and then some.

So, why does it fill us with fear? After all, it’s simply an opportunity to meet new people and connect. Take away the business element and those same women would be unstoppable! What can we do to overcome the jitters before we step out to spread our business wings? Here are a few tips to help you on your way:

Being able to clearly explain what is that you do in a concise fashion will automatically relieve a lot of the pressure of networking. It doesn’t have to be a pitch per se, but you should be able to get across your exact role in a sentence that is both interesting and open to further discussion.

Give them the option to ask you something about your role after you deliver your answer by adding a little mystique. Once you get over the hurdle of the initial connection, more often than not you will be off and running.

Don’t make it all about you

Once you’ve explained your work it’s important to get the conversation back in their court. People love nothing more than to talk about themselves, so you should give whoever you are chatting to the opportunity indulge this as much as possible. The mere fact that you are aware of this foible will also stop you from doing too much trumpet blowing yourself!

Be aware of body language

Joining others as they chat is perfectly acceptable at a networking event, but it is important that you read the signals before approaching. Entering an established conversation can be difficult, but it really is OK to do so. Just remember to look out for the telltale signs that will tell you if their tête-à-tête is strictly private. Make eye contact and smile, if it is reciprocated then it is generally a green flag to join in.

Never try to second-guess which way a conversation is heading in. Always listen intently in order to find out ways in which you can add value to the dialogue rather than spouting something that may come across as pre-rehearsed.

If the person you are chatting with mentions that they have recently changed their Human Resource software provider, don’t yawn! Instead, actively engage them with a question about it and then steer them away gently to something more agreeable to you.

Regardless of what a person does or speaks about, never be dismissive. Keep an open mind and remember that just because they may not directly be able to help your business move forward doesn’t mean that they do not know somebody who can. Be polite and take an active role in the conversation.

It’s worth remembering that networking can really give your business a shot in the arm and that it really is no different to what you do in your day-to-day life. Just treat it as another way to make new friends and much of the fear will simply slip away. Get out there and have fun. The more you do it, the easier it becomes.

Work and career tips and adviceWork and moneyWork, Business, Money

Ideas to help you to work smarter and impress your boss