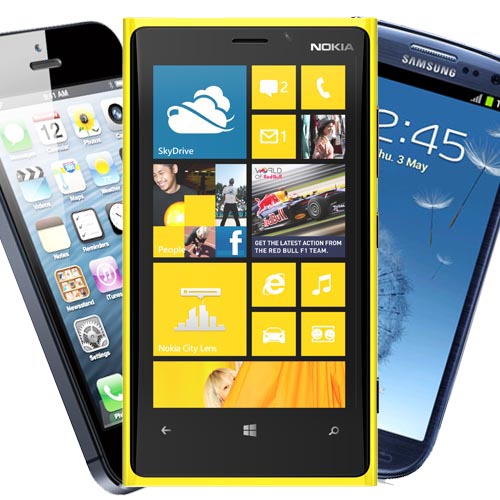 Many years ago, I was a Blackberry supporter. I upgraded to every Curve model, and even succumbed to the Torch for touchscreen finesse when it came out.

Then the worst thing that could happen, happened. My phone kept on freezing and crashing all day everyday. I got it replaced not once, twice, thrice, four times but an infuriating five times and then I threw in the towel (and a major wobbly!).

It was at this point that I moved onto the iPhone 4.  Apart from the poor battery life, I was sucked in by the ‘massive’ screen,the ease of navigation and the plethora of apps for everything I needed to do. Happy to carry my charger with me everywhere I went, I soon became an iPhone ambassador, singing its praises and willing all business mums to jump on the bandwagon.

But, roll on a few years and iPhone 5 just doesn’t seem to cut it anymore. I got the phone about two or three months after its release and it’s been replaced already for strange behaviour.

First of all, the Samsung Galaxy S4 is huge…and that’s a good thing if you browse a lot on your phone (like me). The battery time is like north and south to the iPhone. I could leave home two days in a row with no battery charger in my bag and not panic about my phone dying on me. This is important for busy mums who need to be contactable for work or the children – and it’s not something I would back down on.

I was, however, a little underwhelmed by the Android Marketplace – it’s a cheap version of Apple’s App store in my humble opinion, and you have the bore of signing up to Google Play to access anything. It’s like that whole iTunes registration issue all over again! But, the benefit is that you get a very good, robust phone that does the job and more, day in day out. And it really does look the part.

Nokia Lumia 620 – for those who mean business
Now this isn’t the most recent Nokia Lumia Lumia phone,there’s a 925 on the market, but it still packs a punch.

Yes, it’s smaller than the iPhone 5, but as soon as you start the phone and are embraced by the completely different layout of the Windows 8 operating system, it’s like a breath of fresh air.

If you’re a PC user who has a Windows 7 or 8 operating system, you’ll feel right at home with the interface.

For me, the added benefit is being able to access all your essentials files using Office 365. All you have to do is sign in and you’ll gain access to Word, Excel, PowerPoint, Outlook, OneNote and everything is synced. Setting up Office 365 is cheap,too. At the time of writing, prices start at just £2.60 per user, per month but it means you don’t have to worry about upgrading your Microsoft Office packages, as you’ll be using the latest version all the time.

So, no more faffing around with Google Drive, Dropbox and all these other storage systems that we’ve convinced ourselves we need because of the likes of Apple and other brands that have ‘forced’ us to look for a way to access our files from everywhere.

Another plus point is that you can upload more than just picture attachments to your emails – something that Apple just doesn’t seen like it’s ever going to allow us to do.

If you do need extra storage, however(and forgive me if this sounds a little two-faced), you can always use Microsoft’s SkyDrive, which gives you the first 7GB of storage free.

Overall verdict?
Yes, the iPhone is overrated. How often do you use those 20-odd apps you downloaded? Aren’t you tired of constantly having to do a software update and then finding that it has a knock-on negative effect on your phone’s performance? Having a phone because of the perceived kudos won’t help your business flourish.

I’ve personally shifted to the Windows Phone. Why? Because it’s seamless, it lets me connect to my home office in the way I need to, and I can still stay social with Facebook, Twitter, LinkedIn etc and get most of my favourite apps in the Windows Store (WhatsUp being top of the list!).

I’ve opted for the Nokia Lumia 925 – within an hour of doing the review, I made a call t-mobile, my network provider and asked for an early upgrade…it wasn’t free, but worth the peace of mind.

Here’s a great video I’ve found that talks through 5 models of the Nokia Lumia that will show you what’s out there:

Thinking about doing a course but can’t afford to pay for childcare? Read this…

Did you listen in to the radio debate about childcare costs on Radio Five Live last night?

Four ways to make money from your content online