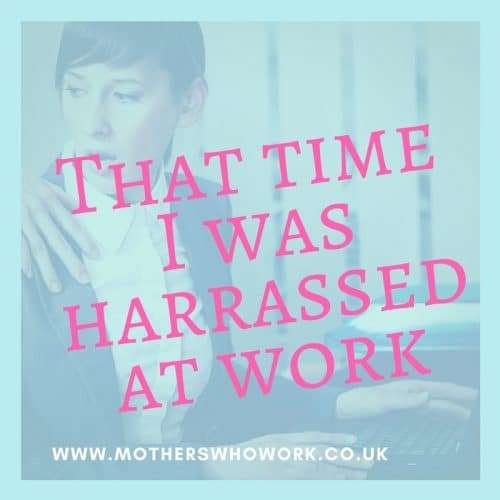 Every other news story this past month seems to be about the inappropriate behaviour of men in sectors from film (aka the alleged Harvey Weinstein) to politics. Industry big wigs seem to have, for years, got away with treating women any way they wish.

Some critics have blamed women for dressing inappropriately, not standing up for themselves and even for putting themselves in a vulnerable situation themselves.

The fact is, it’s not always as simple as making sure you’re dressed like a nun, not being ‘putting yourself’ in a position where you’re alone with a pervert boss, or actually fighting someone off.

Years ago, when I was at university, I used to temp for a number of government departments on the two days that I was;t at uni. During the holidays, I’d tty to make as much money as I could, so I worked full-time.

My agency loved the IT skills I had.I could roll out Excel spreadsheets and format Word documents with my eyes shut. Access databases were a doddle and PowerPoint was child’s play. And so, instead of being sent to the small companies that paid a pittance, I was given the cream of the crop jobs because I was such a Microsoft geek.

So, like any there temp contract, I was emailed the details of who I was going to be working under, given a brief on the phone and sent on my way to another government department.

As soon as I walked in, the I noticed that the office was quieter than the usual office departments. There were only two other people in the office that day (a male – let’s call him Tom; and female – let’s call her Sarah), because the others were on leave – probably the reason why I was called in.

I could tell from the outset that Tom was a bit over-enthusiastic about helping me. As green as I was, I remember vividly how awkward I thought he was behaving. He only had to explain hat needed to be done and leave me to it, but he kept looking for reasons to come over to my desk and leaning into me. It was quite overbearing.

To my despair, Sarah left the office for meetings. I felt so vulnerable. I had to endure the stares and the vomit-inducing attempts that Tom was making to get his point across. A touch of my arm, my shoulder. I really did;t understand it – most civil servants I’d come into contact were so impersonal, very corporate, and physical contact had never been an option.

When I asked about Sarah’s return, and when the other officers in the department would be returning, the response I was given made it clear to me that I had a choice: suffer Tom’s behaviour or just leave. Leaving would mean that I would probably not get paid for that day, and losing my agency (would they send me out to work for another government department after this?).

What did I do?
I took the earliest available lunch possible, managing to brush off Tom’s request to join me for lunch. And once I walked out onto the pavement and breathed in that fresh air, I didn’t go back. I literally took my lunch break and went home. I was fuming, but I felt that I’d escaped something potentially harmful, or degrading.

I did call the agency and tell them that I was feeling unwell. I had an excellent record, so they were understanding. I should have explained what had happened, but I didn’t have the guts. My 19-year-old self felt completely out of her depth.

So, when people make remarks about women needing to just take action, I can understand where they’re coming from, but some of these perpetrators are so well rehearsed in their tyrannical approach when it comes to targeting their victims. Unless you’ve been backed into a corner in what is clearly quite a calculated approach to getting what they want (or at least trying to), please don;t judge. Wrong is wrong.

When I walked out of my temp job, I was a student living at home. I needed the money, but I den;t have to worry about paying any bills in the way that many of these women who have come forward about sexual harassment and assault are. It was much easier for me to walk out of the job then than it would be if it had happened ten years later.

Are you being harassed? Here’s how to know for sure
Acas, the Advisory, Conciliation and Arbitration Service (the organisation that administer tribunals), describes sexual harassment as: “‘unwanted conduct’ related to a person’s sex causing a distressing, humiliating or offensive environment for them. ‘Unwanted conduct’ of a sexual nature – this is sexual harassment. Less favourable treatment of an employee because they have rejected sexual harassment or been the victim of it.”

If you feel that the way you are treated has been highlighted in any way by that description, find out what you can do from Acas.

What to do if you’re experiencing sexual harassment
The first thing that I recommend to anyone who is experiencing difficulties at work is to keep a log (a diary). Write down what was said and what was done, the times, who was present etc etc. That way, when you decide to take the matter further, you have as much evidence as possible.

If you are able to tell the perpetrator that you don;t feel comfortable about their behaviour towards you, then you should. If not, speak to your HR department about it to discuss the company’s policy and get some support. Whatever you do, don’t suffer in silence or feel that you have to endure it.

Lost your confidence? How to get it back before work on Monday

Are you being mistreated at work? Find out what taking your employer to tribunal involve?

Did you listen in to the radio debate about childcare costs on Radio Five Live last night?