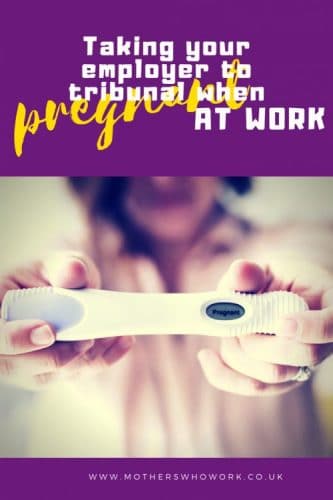 How to cope with problems at work Mothers' rights at work Pregnancy at work Work, Business, Money Joycellyn Akuffo
ShareTwitterFacebookE-mail

Yesterday, we gave you a rundown on what to expect at work during your pregancy from first to second, to third trimester. Today, we’ll be looking at what to do if your employer turns nasty during your pregnancy.

Making a decision to take your employer to a tribunal won’t have been easy. However, if you don’t do something about it, they get away with it and will likely do it again. Every wonan has the right to be treated fairly at work – pregnancy can be stressful enough if you have health issues; and there’s so much you may already have on your mind in prepapration for your bundle of joy anyway, so havig issues at work just compounds the issue.

And it’s likely that there has been a catalogue of issues along the way that you feel cannot, or has not, be resolved fairly through your employer’s grievance procedure. The most common claims for working mothers are for unfair dismissal and sex discrimination arising out of pregnancy and maternity leave. So, how exactly do you make a claim?

How does it work
The first point to make about the employment tribunal (and the good news part of the story) is that there is no legal cost involved in making a claim. There is no fee for applying and the general rule is that you cannot be made to pay the costs of the employer even if you lose the case. The downside of the no-costs rule however, is that the employer will not pay your legal costs even if you win.

When the employment tribunal was first established, the plan was that it would be a relatively speedy and informal method of resolving disputes and that it should be possible for individual employees to represent themselves without the assistance of lawyers. It is still possible for individual employees to do this and many people do. However, as we shall see, it is a complicated and fairly daunting prospect and many employees would prefer to have a solicitor representing them. The difficulty, of course, is that solicitors are expensive. The start-to-finish costs of representing an someone in an employment tribunal claim are unlikely to be less than £3,000, plus VAT, and could be substantially more than this. There are some solicitors who will work on a no-win-no-fee basis and it may be worth exploring this as a possibility if the cost is what will put you off getting the justice your deserve.

There are certain kinds of cases where it is necessary to write a letter of complaint (known as a grievance letter) before making a claim to the employment tribunal. This requirement essentially applies in any case which is not simply about dismissal. For example, if you have suffered sexual harassment at work or suffered discriminatory treatment at work relating to pregnancy then it will be necessary to do a written complaint before making the claim. If the complaint is just about dismissal itself then you are entitled simply to make a claim to the employment tribunal although you should appeal internally if you are specifically notified of the opportunity to do so.

Have I left it too late to make a claim?
There is a time limit on making a claim to the employment tribunal. The general rule in dismissal cases is that the claim must be made within three months of dismissal. In non-dismissal cases, the general rule is that a letter of complaint must be sent within three months of the action that is complained about and the claim form should be received at the employment tribunal within six months of the action that is complained about.

The claim form can look daunting in that it now comprises of around 10 sides of A4 paper. However, most sections are irrelevant and most of the questions are straightforward. There is a section where you are given the opportunity to explain what the claim is about. It is usually better to attach a typed document to the form that sets out the basis of the claim. There are a number of regional offices of the employment tribunal and you need to find out the office that applies to the place where you actually worked, the claim form should be sent to that address.

The second issue that arises after receiving the Response Form is the question of settlement. A significant proportion of cases are settled before the claim gets to the employment tribunal for a hearing. It is difficult and expensive for employers to defend claims at the employment tribunal and they will often want to reach a settlement even if they think they can win the case in order to avoid costs and avoid any adverse publicity. All claim forms to the employment tribunal are automatically referred to the Advisory Conciliation and Arbitration Service (ACAS) whose job it is to help you and your employer reach a settlement. The ACAS office will contact you and your employer, normally by phone, and discuss whether or not a settlement should be reached.

When thinking about settlement, try to work out what you might win if you were to succeed in a claim at the employment tribunal. In claims for unfair dismissal, there is a basic award, which is equal to statutory redundancy pay and then you get compensation for loss of earnings on top of that.

How much money do I get?
If the claim also relates to sex discrimination then you could also get an award for injury to feelings. In a straightforward case where a pregnant employee has been
dismissed for a reason related to pregnancy, after being employed only for a short time, then loss of earnings could amount to between three and six months’ worth of pay and an award for injury to feelings might amount to between £3,000 and £5,000.

You also need to think about the prospect of winning. If the claim is worth around £10,000 and there is a 50/50 prospect of success then it would be worth reaching a settlement at around £5,000. Having said this, it might be better to start negotiations with a higher offer so there is space to move down in the course of the inevitable haggling.
Solicitors have a number of tactics that they play when negotiating, and people who are not represented by someone often find themselves receiving a letter with a final offer of settlement that has to be accepted by a given deadline. The best approach to this is often to ignore the assertion that it is a final offer and ignore the deadline and then make an appropriate counter offer.

Discussions between you and your employer (or their solicitors) about the settlement can be lengthy, and it’s not uncommon for them to drag out, right until the date of the employment tribunal – there have been cases where a settlement was reached in the waiting room on the date of the tribunal! However, assuming that there is not going to be a settlement, there are some preparatory steps that need to be taken for the employment tribunal hearing. The main preparatory one involves preparing a bundle of documents and preparing witness statements.

The bundle of documents is simply a collection of all the relevant paperwork put in chronological order with an index. The parties need to agree this bundle before the employment tribunal and are often given a specified deadline for doing so by the particular regional office. Most employment tribunals also require the parties to produce written witness statements (a detailed description of what happened) and to exchange this before the date. The witness statements pack that you provide will also include any witnesses you bring with you to the tribunal on the day.

Most employment tribunals hearings are scheduled for one day, but they can go on for two or three days if they are really complex. The employment tribunal takes place in an ordinary room that does not look quite like a court room, but it is quite a formal setting. In most cases the tribunal panel will consist of three members, one will be a legally qualified chairperson and two of will be laypeople, one from a trade union background and one from an employer’s organisation background.

In most discrimination cases, the claimant will give evidence first. This involves the claimant reading out their prepared witness statement and then being subjected to cross-examination by the other side or by the other side’s lawyer. This cross- examination can take two or three hours or even longer. When the claimant and any of the claimant’s witnesses have given evidence, it will be the turn of the respondent’s witnesses to give evidence. The claimant or the claimant’s solicitor will then have the opportunity to cross-examine each of these witnesses. When all this is concluded both parties will be given an opportunity to make a closing address and the employment tribunal will then retire to make a judgement.

Tags: discrimination while pregnant at work, how to cope with problems at work, pregnancy at work, taking your employer to tribunal
Share:

Got a memory like a sieve? Here are some tips to help

How to cope with problems at workPodcasts for mums

Julie SherwoodMoney - how to keep it and how to make itWork, Business, Money

Celebrate the Gift of Reading with Scholastic Book Parties!