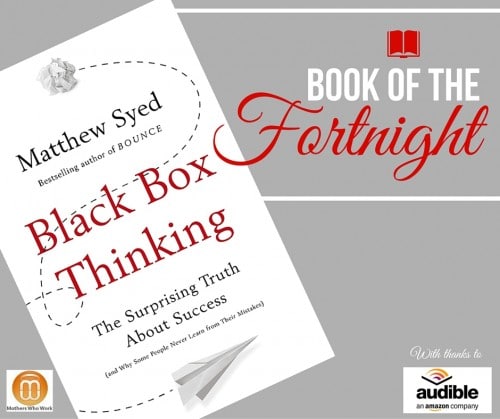 Look around your workplace, your community and society in general and there is a common theme: a fear of failure. Add to that, the not wanting to be seen to make a mistake and hiding any mistakes we make and it can be quite a lethal cocktail.

is onto something when he looks at why we are allergic to failure and avoid it like the plague. He draws on a United Airlines flight 173 crash in 1973, when the flight crew spent so long trying fix a landing gear problem that the plane ran out of fuel and crashed, killing eight people. After the crash, the black box in the plane (like all planes) was scrutinised and lessons were learnt from the incident, so that no incidence of its kind would take place again. On top of that, protocols and training were changed and because of that no incident of its kind has happened again.

Why is this relevant? Well it seems that the airline industry is unique in this way of thinking and working. It’s common practice that faults are shared so that so that pilots and flight crews can learn from each other. Isn’t that how it should be in all sectors? Imagine what the health sector would be like if the same were true. Instead, what we have is a reluctance to investigate failures.

But it doesn’t stop there. Think of the industry you work in. How many people put their hands up to failings and share their learning in your workplace?

While we may not be able to do much about an industry in one day, reading Black Box Thinking can give us all an insight into what needs to change. If we all take a step in our business practices and in the teams we work in, there is much positive to be gained.

by Matthew Syed can be purchased as an audiobook on Audible, the sponsors of this book review.