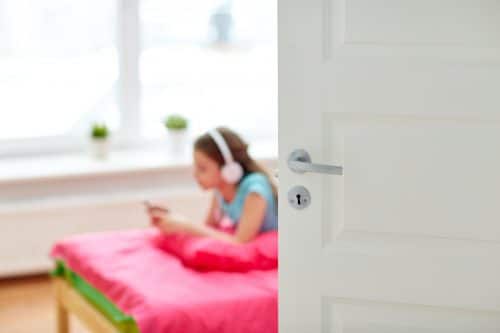 It’s often suggested that children are given a brick phone when they start going to school independently. This is so that, should they be targetted by thieves, they don’t lose out on an expensive phone. A thief would probably spit at them than to take the phone – and that is safer than being beaten up or stabbed for the latest smartphone.

While I see the logic behind this, I don’t agree. That’s why my son has an iPhone. I probably shouldn’t even be putting it out there for the world to see, but I’ll explain why I would rather he uses a smartphone (and the iPhone is easier because it connects to all my own devices) than a brick.

The location services on the iPhone are a Godsend. It helps me to: keep an eye on where my young man is; see how he’s travelling home; and to pinpoint exactly where he is at any given time (instead of being a totally uncool mum who rings him frantically). I literally open the ‘Find my iPhone’ app and I can see exactly where he is. If I’ve been calling him severally and not getting an answer, I take this one step further and ‘Play a Sound’ on his phone. It’s so loud that even the squirrels by the bus stop probably scream at him to answer his phone, but it means I can get his attention and deliver whatever message I need to get to him.

There’s nothing that grates me more than seeing that my growing teen has run out of data. He’s on the same data plan as me, and there is wifi practically everywhere we go, but it happens – very often. Thankfully, iMessage comes to the rescue because it will send the message very nicely to another iPhone user – Mum! When he had a Samsung, I would just stare at the green bubbles waiting for a response, spitting feathers along the way, but now, all I do is look at the status under those beautiful blue iMessage bubbles. I’ll know when the message has been ‘delivered’ and when he has finally taken the time out to ‘read’ them. My blood pressure has never been so calm.

I won’t bore you with statistics about the effects of mobile phone and gadget usage on children. If you have children you’ll know that most of them are obsessed with their phones and it can be quite a bind to change that dynamic. So the good people at Apple (who are probably partly responsible for this problem in the first place, I might add) have added a new feature to the iPhone called ‘Screen Time’. when I saw this, I knew instinctively that my screams and hollers about getting off the phone; the several confiscations and the mood swings of my teen would greatly reduce.

Screen time basically allows me to set time limits on said son’s, well, screen time usage. I can set up to an hour a day, for example, on the time he can use his phone. Perfect.

But that’s not all. To his annoyance, I can also set time limits on the apps that my son uses, and set content and privacy restrictions on what he consumes. If you have a teenage son, you’ll know that the levels of curiosity seem to go off the scale pretty fast and the internet and social media really do provide far too much access – inappropriate access – to content they would not be able to access otherwise. So, I am comforted by the fact that I can block age-inappropriate content on his phone – that’s videos, images and even music.

Parenting has never been easier.

My dearest is told not to use the phone when he is walking or on the tram or bus. If it’s out of sight, then it should be out of the minds of those who target children to steal from. He is such a bookworm anyway, bless him, that he looks the least likely to be carrying the latest iPhone, and that’s perfect for me.

As a disclaimer, I know that the Android phones have their own version of a lot of these…stay tuned for a review any day soon.

Can you ever repay a grandparent back? Here’s one thing to consider doing

Staying SaneStaying sane at workWork and career tips and advice

Pomodoro what? Find out how this technique can change the way you work