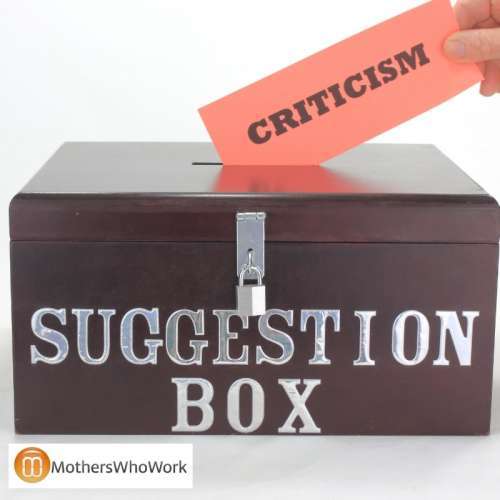 Hands up if it grates you when you know someone really needs to know something about the way they work or their actions, but you can’t tell them because you know their reaction will leave you feeling like a villain.

Learning how to respond to criticism, and how to deal with the negative things that people say to us is a sign of maturity and personal development. Not everyone comes out of the womb with this gift – but it doesn’t mean we can’t cultivate it or develop it.

As Aristotle once said, “Criticism is something we can avoid easily by saying nothing, doing nothing, and being nothing.” If you’re not important, no one will go through the trouble of telling you something you need to change about yourself or what you’re doing.

In this Information Age that we live in, having a thick skin is as essential as the oxygen we breathe. If you can’t handle someone else’s opinion sometimes, you will crumble…eventually!

Criticism can seem like an attack on our self-esteem (if we are sensitive) and our defense (our attitude) is the way we try to protect ourselves from such painful experiences. It’s similar to that reflex action we have to click ‘take me to the website’ link in an email offering 70% off from our favourite fashion brand. Oki, all jokes aside, that defensiveness is equivalent to us putting up our hands to prevent ourselves from being physically hurt when a flying object is coming our way, for example. We put up our guard to protect our emotional or mental health.

If you are sensitive, or constructive feedback adverse, there are some of the positive ways to respond to criticism. These can help the negative reactions we instinctively feel become something positive in our lives. They can also become a tool for self-development and personal growth.

A Change of Mindset

Norman Vincent Peale, one of the greats in all things to do with self development (and if you haven’t heard about him, add hin to your book list as a matter of urgency!) once said: “The trouble with most of us is that we’d rather be ruined by praise than saved by criticism.”

That simple sentence speaks volumes. Don’t get so sensitive about what someone says to you that you miss the truth that will set you free!

The next time you’re criticised by a loved one or work colleague (just wait for it, it will come!). When it happens, take it as an opportunity for learning and self-growth – not as a personal attack on your self-esteem.

So, put yourself in the shoes of anyone who criticises or gives you some feedback. It isn’t always as easy as you may think.

So make an effort to forgive the person who has cared enough to tell you their concern and actively seek to work with them to negotiate a solution you are both satisfied with. The other option would have been to bitch about you behind your back, which is what often happens in the workplace.

Don’t get into self-defence mode. That’s often a one-way ticket to an argument. Instead, avoid looking defensive by just thanking the critic for telling you. A simple note of thanks will enable both parties to calm your emotions and to discuss the situation later (when you’ve both had the chance to think about it). It’s a great way to take the awkwardness out of the situation for both sides.

Be Real and Honest to Yourself

If someone cares enough to tell you something, take some time to ponder on it. A good friend won’t just shower you with praise and not set you straight when you are wrong.

So, when you receive criticism, think about the criticism; ask yourself if it is justified – and be honest with yourself when answering that question.

If the criticism is justified, then look for ways to stop that situation recurring. If the criticism is not warranted, take steps to refute it calmly, and preferably with evidence.
So, don’t dwell on the criticism, just try to move on. Remember that your value is not determined by one piece of criticism.

What’s wrong with being a Billy (or a Betty) no mates?